US Air Force artist’s rendering of the Sentinel in flight. (Source: US Air Force)

The modernization of America’s strategic deterrent capability is progressing rapidly for two branches of the nuclear triad – land-based ICBMs and strategic bombers. Air Force Maj. Gen. Jason Armagost is responsible for strategic planning and requirements for both: the Ground-Based Strategic Deterrent (GBSD), now known as the Sentinel, which will replace the Minuteman III ICBM; and the B-21 Raider, which will join the B-2 and B-52 for long-range bomber strikes.

In this Q&A with Armagost, Director of Strategic Plans, Programs, and Requirements, Headquarters Air Force Global Strike Command, Barksdale AFB, LA, we discuss the latest developments in the Sentinel program, how strategic deterrence can function complementarily to tactical architectures like JADC2, and the meaning of ‘nukesurity’.

Breaking Defense: What are the key improvements the DoD should expect in terms of its strategic deterrent capability after Sentinel is awarded? 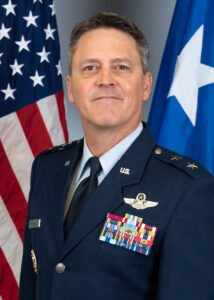 Armagost: Sentinel will be very resilient and flexible. It is not only for our own security, but also for our partners and allies around the world. It is an evolutionary capability and conscious choices have been made about how we can make it efficient with existing infrastructure and modernize the capability to remain flexible with open mission systems and a digital architecture to evolve with changing threat environments.

The key role for the ICBMs is obviously to hold at high readiness and in a distributed manner. In that way it is both a continuity and an evolution of skills [and] will respond to the President’s instructions in new ways.

Breaking Defense: What are the challenges of maintaining the existing Minuteman III system while running on Sentinel?

Armagost: Minuteman III saw service in the 1960’s with an initial service life of 10 years. When we’re done with Deployment Sentinel, it will have been deployed for over 60 years. It was never designed to be sustained the way we had to maintain it.

Because we’ve learned those lessons, we’ve also learned how to shape what we believe Sentinel needs to bring into the future, to make it viable for decades from a modern sustainability perspective. Since we fully understand the issues, we also understand the transition.

That’s not to say we’re not surprised by a part that suddenly becomes obsolete, or material that fails in ways we weren’t expecting. But with our team of experts, we’re able to quickly grasp that, mitigate it, and then find solutions to ensure the transition plan stays healthy. 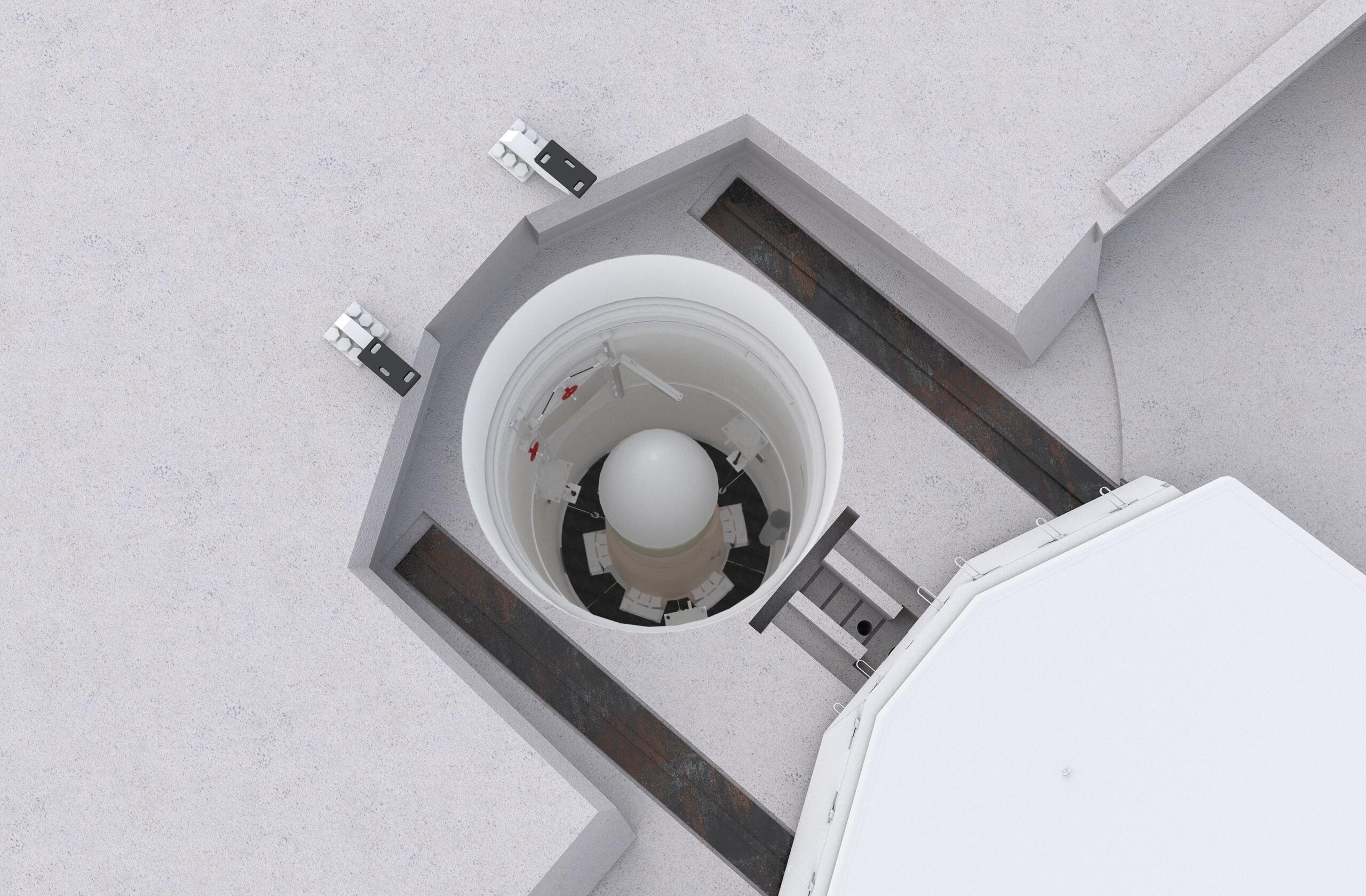 Shown is an illustration of the LGM-35A Sentinel launch silo. The 1970s missile replacement modernizes the ground-based branch of the nuclear triad and brings to an end the Minuteman’s more than 50 years of service. (US Air Force illustration).

Breaking Defense: They are also responsible for the B-52 requirements. The bomber’s lifespan is extended under the B-52 Commercial Engine Replacement Program (CERP). Was it essentially no longer possible for Minuteman III to do the equivalent of a missile rework like you did for B-52?

Armagost: In the case of a rocket, it’s more than a redesign. It’s a weapon systems approach. You may find a launch pad part or other critical component that is no longer manufactured. The company that built it no longer exists. Going in and trying to find a company to make an item isn’t cost effective for the Air Force, and it’s not cost effective for a company.

There aren’t many companies interested in making boutique products using old manufacturing techniques or materials that no longer exist. So the business case for maintaining the Minuteman III really doesn’t exist anymore. That’s not to say we can’t find ways to mitigate and plan for the health of the system. But it’s not something we can do forever, and it’s certainly not a business model that everyone would design.

Breaking Defense: GBSD was conceived long before we started talking about great power competition with China and Russia. How might your thinking about GBSD evolve in that regard and because of the Pacific orientation?

Armagost: Admiral Charles Richard [commander of US Strategic Command] has been very open about what China is doing with its ICBM fields. Our thinking hasn’t evolved that much, but it has stimulated the discussion behind the scenes in many ways – in academic circles, in the global strike, at STRATCOM – and it has brought it more into the public domain. So I wouldn’t say it has evolved our thinking, but it has brought more attention and clear thinking from others who may not have been involved in the past. That was good.

In this case, what I want to say about the triad and the ICBM branch in particular is that they have a stabilizing and risk-mitigating function for our country, our partners and allies. The National Defense Strategy makes clear what we are doing with our nuclear strategy. The ICBM portion of this, currently Minuteman III but Sentinel going into the future is that stabilizing force so we can hedge against a break out with new enemies.

Breaking Defense: JADC2 and All-Domain Operations are tactical operations concepts specifically related to Kill Chain and OODA loop improvement. Is there a connection between this type of tactical deterrence and strategic deterrence?

Also Read :  World Intellectual Property Organisation on why scales of economy are so important in protecting content rights

Armagost: There is absolutely. I remember this General David Goldfein [former Air Force chief of staff] It used to be said that without NC3 there is no JADC2 [Nuclear Command, Control, and Communications, which is also part of Armagost’s portfolio]and there is no NC3 without JADC2 going into the future.

Command and control is and will remain a military principle, regardless of the technology employed or the capabilities we possess. In order to lead this credible and viable force into the future, we must be able to command and control it.

Within JADC2 there is an opportunity to combine conventional capabilities across the spectrum right down to nuclear options. The President’s ability to decide on a range of options is actually increased by this command and control architecture if we get it right. So they are absolutely connected.

[Air Force Secretary Frank Kendall] talks about how everything is connected. For the JADC2 question, the question of how the tactical connects to the strategic is becoming increasingly relevant because of the speed of technology, because of the way technology is used by our opponents, and the speed of the environment.

When we talk about any system, be it B-21 or Sentinel, it is important to understand how they connect to the other abilities and how they are commanded and controlled in an integrated way.

Breaking Defense: GBSD is developed with a modular and open approach usually associated with tactical systems such as cybersecurity improvements related to evolving threats. What is modularity for strategic systems?

Armagost: I pretty routinely hear Northrop Grumman say that Sentinel was born digital. For this reason, it helps us to think clearly about how to meet the challenges for a digital system at the beginning of the design, so that Nukesurity is integrated into the program.

Armagost: It’s a safe business approach to nuclear capacity. It is very conscious, coordinated and transparent to oversight. The ability to be safe and reliable from camp to weapon system to camp is a tremendous effort by many different agencies, senior leaders and within the armed forces. It’s an approach to business management that in turn provides the president with secure, reliable, and predictable on-demand capabilities.

Breaking Defense: What is the near-term roadmap for Sentinel?

The next major milestone on this acquisition path is Milestone C, the production decision. That’s planned for the third quarter of FY26.

Breaking Defense: How confident are you of hitting those milestones and goals?

Armagost: Across our entire portfolio and Global Strike Command, we have an excellent relationship with the Air Force procurement side and contractors – be it for Sentinel, B-21, Long Range Stand Off Weapon or B-52 CERP .

This transparency and close relationship allows us to adapt and adapt to whatever comes our way from a supply chain, planning or financial perspective, be it inflation or other cost drivers. The supply chain currently employs many people. We monitor this closely and the close relationship we have with contractors allows us to adapt to anything that arises in this environment. Much does not surprise us.

Breaking Defense: On a different topic, what’s the latest on the B-21 program and its upcoming milestones?

Armagost: The B-21 is obviously a bit further than Sentinel. The interesting thing is that these programs learn well from each other, especially in the digital environment. The lessons we learn from one, we build into the other and bake into it in a variety of ways—particularly in the areas of digital engineering, manufacturing, and software, where we learn a lot and make the programs better as a result. Between the B-21 and GBSD they are on budget, on schedule and meeting the baseline of the acquisition program.

In March, Sec. Kendall that Air Force Plant 42 has six aircraft in service. From the perspective of organizing, training and equipping for our MAJCOM here in the global strike, we are building military constructions at Ellsworth Air Force Base, which is scheduled to fly the first operational aircraft there in the mid-2020s.

It’s starting to get real. In other words, we have some good plans in place for equipping and staffing the test equipment and then the control gear to ensure the transition is as smooth, efficient and quick as possible.