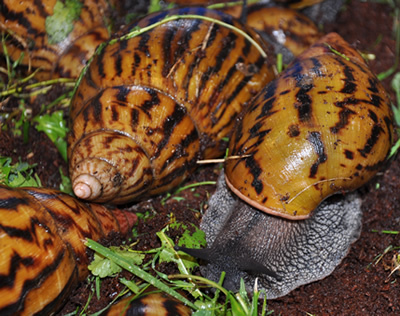 The Ministry of Environment, Science, Technology and Innovation (MESTI) says the global snail value chain business has grown to $2 billion and Ghana needs to capitalize on the huge market.

While “snail meat” is considered a delicacy with great nutritional, medicinal and cosmetic value in certain regions such as the Mediterranean, Africa or Southeast Asia, it is considered a taboo food in other cultures.

Mr. Oliver Boakye, Special Advisor to the Minister, MESTI, underlined the economic importance of the growth of the snail industry in Ghana during the inaugural edition of the Snail Festival organized by the Council for Scientific and Industrial Research-Forestry Research Institute of Ghana (CSIR-FORMIG ).

The theme of the festival was “Farm Snails, Eat Snails, and Market Snails” with the aim of providing opportunities for snail lovers to learn more about snail farming while socializing.

Vouchers worth GH₵5.00 and up were distributed to all attendees, including elementary and high school students, which could be used to purchase any of the snail dishes on display.

Mr Boakye, speaking on behalf of the Sector Minister, explained that irresponsible human activities such as deforestation, bush burning, improper use of pesticides and others pose a threat to the sustainability of the snail population.

He warned that if the trend continues and proper measures are not taken to protect and conserve the snail population, Ghana would soon lose its traditional delicacy of snail meat.

“Appropriate environmental protection is the basis of sustainable development. We have no choice but to look closely at the years of collecting snails,” he said.

He also stated that it is time for Ghana to prioritize snail farming, development and promotion of snail-based industries as the main means of conserving edible snail species.

Prof Robert Kingsford Adaboh, chairman of the CSIR Council, said snails contain rich nutrients such as iron and vitamins A and C, which could improve vision and boost the human immune system.

He went on to mention that snail meat has a higher protein-to-fat ratio than other animal meals like chicken, beef, and others, and that “snail shells contain a high amount of calcium.”

However, noting that a sharp decline in the population of edible snails had led to a rise in their market price, he commended the CSIR for turning a new page in technology transfer by organizing the snail festival and conducting training for farmers.

He urged the youth to take up snail farming as a form of economic empowerment, stressing that it would help solve Ghana’s high unemployment rate.

The CSIR-FORIG strives to be a leader in forest research in the wet tropics.