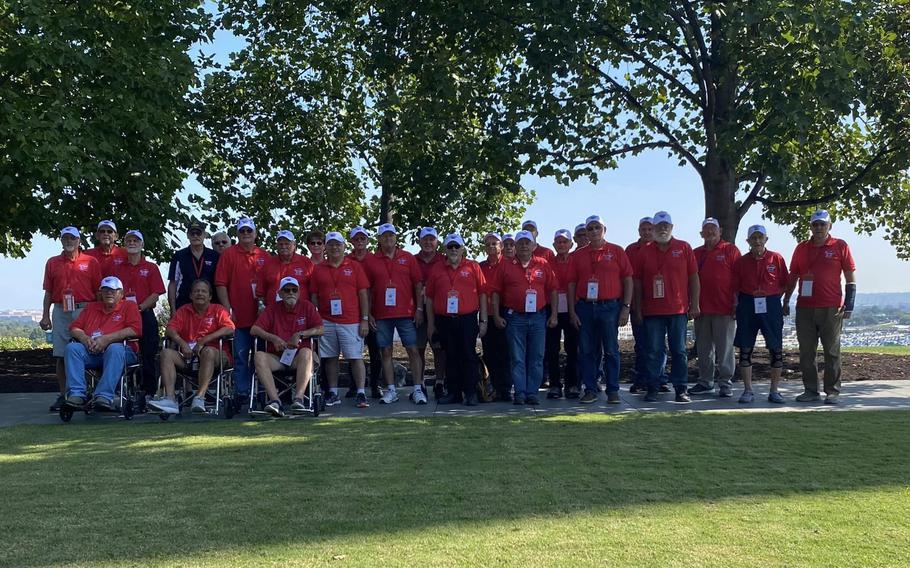 WASHINGTON (Tribune News Service) – Just as the wheels of Flight SY 8651 left the tarmac, the 94 veterans on board were already feeling special.

Martin Anderson, the pilot on the early Wednesday morning flight from Waterloo Regional Airport, wanted to honor those on board as they began their day-long trek to the nation’s capital.

When Lee Greenwood’s “God Bless the USA” blared from the cabin speakers, the 28th Sullivan-Hartogh-Davis Cedar Valley Honor Flight was on its way.

On one of the three buses was volunteer Bob Alexander, who gave the drivers a guided tour of the Washington, DC area. For him, the motivation for volunteering to greet veterans at the airport and provide tours is twofold.

After spending 27 years in the Air Force, Alexander hoped to honor his father, who flew with a B-17 bomber crew during World War II, and the troops he led as squadron commander.

The first stop was the US Marine Corps War Memorial and then the Air Force Memorial, the newest memorial to the armed forces.

The crowd stood attentive and solemn as they watched one shooter being relieved by another as it happens every half hour on the hour and on the hour.

Throughout the day, the veterans were thanked by passing tourists, airport workers, or active service members they met at the memorials.

Brig. U.S. Army Gen. David Cole, a Waterloo native, stands at the World War II Memorial in the uniform he wore with his wife Connie at his 1991 retirement ceremony. He was ready to salute the veterans, as he has done on all 27 previous Cedar Valley Flights of Honor.

“My wife and I have completed all 28 flights of honor. I feel rejuvenated every time I come down and meet these amazing veterans,” said Cole. “Especially veterans from Waterloo.”

From there, the train made its way to the longest stop of the day, the Lincoln Memorial and the nearby Vietnam and Korean War memorials.

Veterans in their memorial red shirts and white hats walked past the Reflecting Pool at the Washington Monument to the Vietnam Veterans Memorial, where more than 58,000 names are engraved on the wall. Many veterans looked for familiar names.

One of those men was David Will, a veteran of the Vietnam Army. Will, a teacher at Columbus Catholic High School in Waterloo, looked up the name Michael O’Conner. O’Conner was the only Columbus graduate killed in Vietnam, Will said.

“I took the next day off from work, so I figured I’d better come over and check on Michael,” he said.

Not knowing any other veterans on that honor flight didn’t matter to Will, who said he’d made some new friends after the day’s events.

“It was a fantastic experience,” he said. “Everyone should do it.”