A team of fifth-year students from the School of Architecture took home the grand prize at this year’s Busan International Architectural Design Workshop (BIADW) — an intensive academic program designed to encourage rigorous research and ideation from undergraduate architecture students from around the world — for won the Connective Corridor project, which introduces a ferry system and revitalization of the waterfront to Busanwondong Station on the Donghae Line, a gateway in Busan.

Held annually in the summer since 2003, the BIADW competition is offered by the Busan Architecture Festival and invites students to explore a wide range of creative architectural and urban design approaches in the context of 21st-century urban culture. 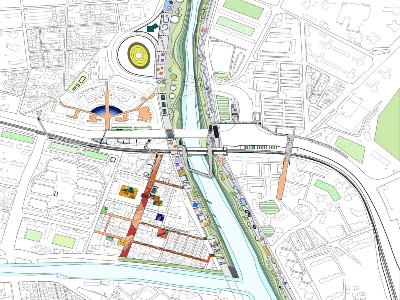 In response to the theme “Megacity: Gate Networking”, teams consisting of a senior professor and three students were asked to propose a development plan for Busan’s railway network and its stations near the Baltic Sea, which was one of the most important factors decisive for the success of the megacity “Busan Ulsan Gyeongnam (Buul-gyeong)” in Seoul.

This year, 15 tutors and 45 students from domestic and foreign universities participated in the 17-day online workshop with two proposal critiques, with the aim of interpreting the topic in a limited time and showing architectural alternatives to the landing pages.

Led by Daekwon Park, Chair and Assistant Professor at the School of Architecture, the Syracuse University student team, consisting of Nicholas Chung ’23 (B.Arch.), Chenhao Luo ’23 (B.Arch.), and Zhi Zheng ‘ 23 (B .Arch.) Busanwondong, the station of the first leg of the Donghae Line in South Korea, was assigned as the operational site.

Once upon a time, the Donghae Line railway network served as a driving force in Busan’s development and as a gateway to the city. Although its history and surrounding developments are currently underestimated in terms of utility and importance compared to the past, the railway line is still a crucial artery, stringing coastal cities like a string of pearls, connecting South Korea’s east coast to the rest of the country and beyond .

The School of Architecture team began their research on Busanwondong Train Station by first understanding the importance of the Donghae Line at different scales, as the route itself has a rich historical narrative and wide geographic range, crossing three provinces. With Busanwondong Station towering over the Suyeong River, the team saw an opportunity to use the river as a new mobility option by introducing a ferry system that stops at various trading locations and transit ports, offering a new way for people to get along the river River locomotion coastal border of Busan. 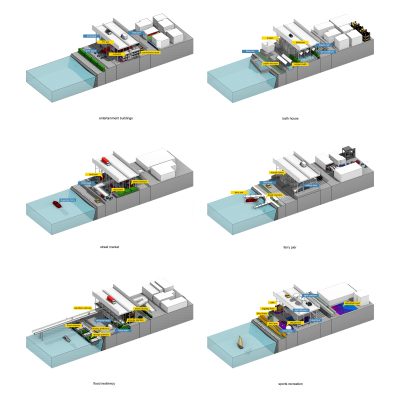 By analyzing Busanwondong Station’s demographics and usage patterns, the team highlighted the need for civic, cultural and recreational programs and proposed activating the riverbanks by expanding the existing coastal landscape upstream from the bay to include a resilient green Creating a corridor that spreads out into the surrounding urban landscape, repaving streets and activating urban voids that become third spaces for locals.

READ:  Win a 2-Night Stay for Four at Wilderness at the Smokies! | Contests

A series of elevated expressways flanking the Suyeong River and Busanwondong Train Station are transformed into porous membranes that invite people to come together while pragmatically and symbolically activating the periphery of metropolitan Busan – the water that represents the identity of Busan is so important, becomes the hearth of the community.

The team’s transformation of the waterfront becomes a catalyst, sparking a series of complementary design proposals that coalesce into a series of robust and diverse networks for local communities.

READ:  What Is Avalanche? - The Defiant

After a series of reviews and revisions, the Syracuse University team’s project was selected by the judges to receive the grand prize presented by the Ministry of Culture, Sports and Tourism of the Republic of Korea.

“Although the workshop only lasted 17 days, my students were able to formulate a thoughtful proposal based on a rigorous site analysis and theme interpretation,” says Park. “Your research on mobility systems (train, highway and ferry systems), riparian development and neighborhood needs is compelling, and the strategy of using the floodplain as a catalyst for neighborhood renewal is intriguing.”

“We hope that our design can be part of a larger conversation about how the urban environment should be a dynamic reflection of its people and how it should adapt to the needs of indigenous people,” say the team members.

To view a video of the team’s winning entry, visit drive.google.com/file/d/1V0TbaRJhUqWioonw_Ixd3QSkyiB79IkS/view.

An exhibition of work created during this year’s BIADW competition will be on view during the Busan Architecture Festival in October.

Naver agrees to acquire fashion marketplace Poshmark for $1.2B • TechCrunch

Stay in a Puglian castle restored by two London creatives